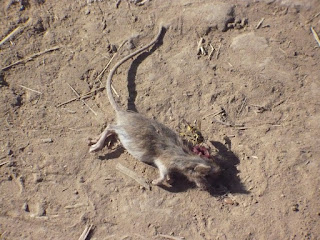 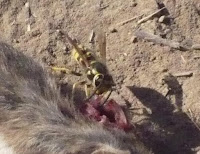 wasps, including the native western yellow jacket (Vespula pensylvanica), shown in this photo feeding on the deer mouse. The western yellow jacket predominantly nests in abandoned burrows in hilly, natural areas, such as the Puente Hills. A similar non-native species, the German yellow jacket (V. germanica) tends to occur in more urbanized areas, preferring to build its nest off of the ground using cavities in trees or walls. The German yellow jacket became established in the northeastern U.S. in the 1970’s and reached southern California in 1991. Although yellow jackets can cause irritation at a picnic by occasionally biting or stinging, they also provide an extremely beneficial service by eliminating large numbers of other pest insects through predation. Since they are attracted to food, the best way to avoid conflicts with yellow jackets is to remove such attractants. However, if a nest is causing a true safety issue, using lure or water traps or removal of the nest by a certified professional is preferable to using pesticides, which can harm other beneficial insects.
Posted by About Me at 5:14 PM