“Butterflies” in the Hills 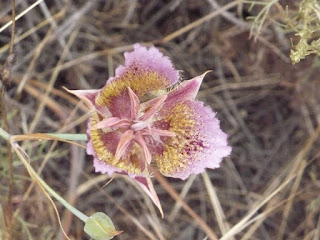 I bet you’re thinking I’m going to be talking about the butterflies fluttering to and from the wildflowers in the Hills this time of year. But in fact, I’m referring to some of the wildflowers themselves – mariposa lilies! Mariposa means “butterfly” in Spanish, and as you can see by these photos they are as beautiful and delicate as butterflies. One of these lilies, Plummer’s mariposa lily (Calochortus plummerae) is in full bloom now in the Hills.

Plummer’s mariposa lily is a rather large lily (about 2 inches in diameter), and is generally brightly colored pink or purple with lots of yellow (or sometimes purple) hairs on the inside of the petals. 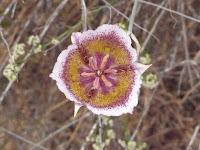 It is considered to be rare by the California Native Plant Society (List 1B.2). During previous surveys throughout the Preserve several years ago as part of the Resource Management Plan, botanists located over 500 individuals scattered in numerous pockets from Hacienda Heights through Turnbull Canyon and in Powder Canyon. These lilies occur mostly on rocky or gravelly soils, often along road or trail cuts where the soil has been exposed and there is less competition from other plants and grasses. It is known from Ventura, Los Angeles, Orange, Riverside, and San Bernardino Counties. 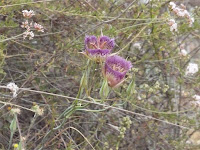 weedii var. intermedius) has also been found in the Hills, and it is also in full bloom right now. It likes to grow in similarly rocky soils as Plummer’s mariposa lily, and can have similarly colored petals and hairs. Interestingly, these two mariposa lilies are believed to be hybridizing in our Hills, such that the flowers often share characteristics of both species. This sometimes makes them difficult to tell apart, but doesn’t make them any less beautiful or rare. Get out there now and see if you can find them before it gets too hot!
Posted by About Me at 2:54 PM