Surprise! That is what I think every time I download the digital photos from our motion-sensor 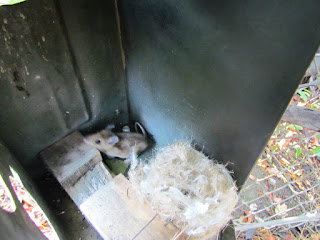 cameras located throughout the Preserve, because I never know what fun surprising wildlife photos I’ll see. But sometimes I’m also surprised by what I find inside the camera itself. Occasionally I’ll find a spider making a web, or a colony of pincher bugs. But this week I found something quite surprising – a nest! And no, not a bird’s nest; nesting season is pretty much over by now for birds, generally ending in August or September. It was a mouse nest! I believe they are common deer mice based on their orange-brown fur on the top of their bodies, and the white fur on their underside, as well as their size and ears. 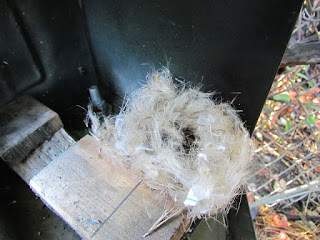 Deer mice can reproduce almost any time of year, especially in our moderate climate, and use a variety of places to build nests. Apparently there was just enough of space for them to wedge into the metal box which houses the camera, and build a fluffy, cup-shaped nest. Nests are often constructed out of grasses, moss, wool, fibers, and thistle down. This nest appears to be constructed mostly of pappus from thistle seeds (“thistle down”) – this is the fluffy stuff that allows the seed to be carried off by the wind. I caught both of them as they were still constructing the nest, and when I went back to check a few days later, the nest was completed into a sphere with a hole in the top – and the female nestled inside (the male ran out of the box as I opened it). Their gestation period is about 3 weeks, so I’ll keep checking over the next few weeks to see if there are any baby mice.
Posted by About Me at 3:07 PM No comments: