Its been almost 8 months since we installed motion-sensored wildlife cameras in the Arroyo Pescadero area of the Preserve, and I thought we should share some highlights so far. These cameras are triggered by movement, including wildlife, people, and vehicles – sometimes even the wind moving the vegetation. Movement triggers an infrared sensor which then triggers the camera to take a digital photo. As you will see, the photo also records the date and time of the photo for reference. At night, an infrared flash will also be triggered, which helps to illuminate the subject enough to identify it, (although the photo is black and white instead of color). The infrared flash is less visible than a standard white flash, which is less disturbing to wildlife, but you will see that some wildlife still notice it.

Some of you have noticed these cameras, despite efforts to camouflage them, as shown in the photo below. 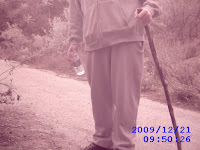 Some of your pets have even noticed them. 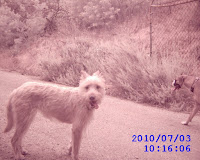 Even wildlife, such as this coyote in the Core Habitat (no public access), have noticed the cameras. 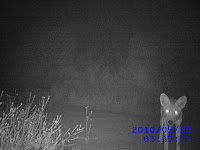 We have seen a good diversity of large and small mammals, both day and night, such as deer, skunk, and bobcats. 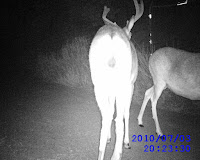 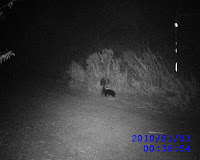 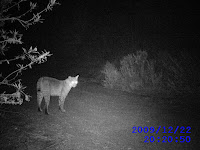 Although bobcats are thought to mostly be out from dusk until dawn, this one is out at two o’clock in the afternoon! 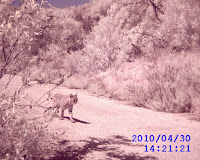 This spring, we have gotten many photos of ground squirrels, birds, and rabbits. Check out this photo of two rabbits fighting – bet you’ll never see them as quiet and shy creatures again! 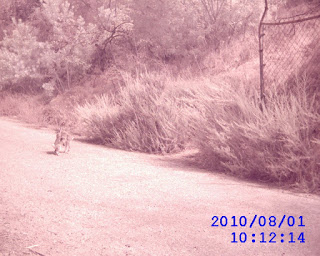 We hope to share more highlights in the future, as these cameras will keep going through November, as part of a year-long study of wildlife in the area.