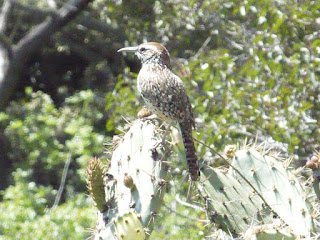 Almost precisely two years ago, former Habitat Authority Ecologist Dan Cooper posted a blog lamenting about his observations of cactus wrens, or the lack thereof (see post dated September 13, 2007 at http://puentehillsnature.blogspot.com/). In his blog, he noted that many sites where he had observed cactus wrens in the late 1990’s appeared to be unoccupied in 2007. I’m happy to report that in 2009, things seem to be looking a bit better than initially thought, but there are still reasons to worry about the species.

This past spring, The Nature Conservancy initiated a regional study to determine the distribution of coastal cactus wren in Orange and Los Angeles Counties. Experts have considered the species to be on the decline, and the variety in southern Orange County and San Diego County is listed as a Species of Special Concern by the California Department of Fish and Game. Cactus wrens are year-round residents in patches of cactus scrub habitat, which have decreased over time due to removal from development as well as from fuel modification activities, frequent wildfires, and competition with non-native plants.

Based on the 2009 survey, the western Puente Hills supports at least 23 occupied cactus wren territories (meaning that a pair of birds was observed); most of these (16) were located in the Sycamore Canyon and Hellman Park areas. Based on a Los Angeles County estimate of 170-200 pairs, the western Puente Hills supports 10 to 15% of the cactus wrens in the County. Thankfully, many of these territories are located on Preserved land, either on the Puente Hills Preserve (owned or managed by the Habitat Authority), or on other preserved lands such as Schabarum Park. Unfortunately, some are located on privately-owned lands, and therefore may not be protected against future disturbance and habitat removal.

So, there appears to be some good news since the September 2007 blog posting. Several sites that were noted as unoccupied appear to now be occupied, such as above Hellman Park and in Schabarum Park. There is also hope that other territories are out there that have yet to be found, like the new one I stumbled upon just this morning in the Worsham Canyon area! But we’ll have to keep monitoring these territories to see if they persist or decline over time, and keep an eye on those territories on privately-owned lands, to see what the future holds for the cactus wren in the western Puente Hills.