Love is in the air – literally! 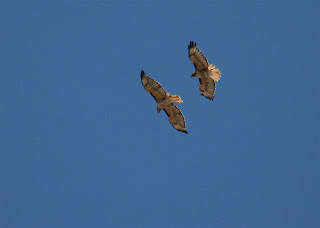 There is a public display of affection everywhere these days, even over our heads. Spring is just around the corner and the hawks in our area (such as red-tailed hawks, red-shouldered hawks, Cooper’s hawks) are letting us know through their aerial courtship displays in the hills. Many of you undoubtedly see hawks flying overhead during the daytime, sometimes in pairs or small groups. This is especially common in the late morning or early afternoon, when hawks and turkey vultures take advantage of “thermals” which result when the air heats up and rises, helping to lift these large birds high up into the air. However, right now you may see them not only flying together, but diving toward each other or trying to land on top of each other while in the air. In fact, red-tailed hawks, the most common hawk in our area, have been reported to actually lock their talons (claws) together mid-air and plummet toward the ground together. These acrobatics are the hawks’ mating rituals or courtship, and it indicates that they have already staked out a suitable nest site, started building a nest or repairing an old one, and will be laying eggs soon. Many hawks mate for life and often return to a nest they used the previous season. So, keep your eyes peeled in the skies for some “PDA” – public display of affection – and you might be in for a great show!

Photo credit: Tom Clifton
Posted by About Me at 4:29 PM No comments: