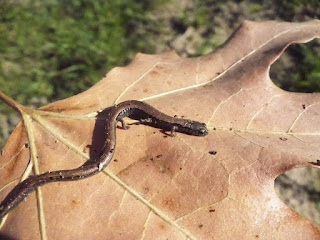 Much time and attention is devoted to what Biologists commonly call “charismatic megafauna” – namely, the larger and cuter animals, such as hawks or bobcats. Plus, megafauna are generally easier to spot when out on a hike or bike ride. However, there are numerous forms of “microfauna” in the hills worthy of some attention.
I recently found one such specimen while weeding a recently planted restoration area. As I was pulling out a non-native mustard seedling, I saw a worm…or what I thought was a worm. Strangely, this worm had arms and legs! So I picked it up, and sure enough, it was no worm, but a very tiny salamander – a black-bellied salamander. They really are about the size of an earthworm (generally no longer than 2 inches and about the same diameter), but with tiny legs, a tiny head with eyes, a reddish topside with a dark stripe, and a mottled gray underside. 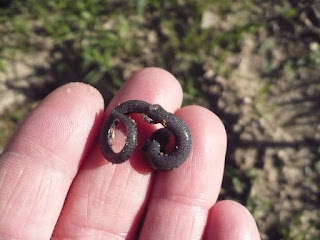 They also like to live in moist places like worms – that is because they are a type of “lungless” salamanders, meaning that they breathe through their skin, which needs to remain moist. So, you are really only likely to see them near creeks or shady woodlands, and only in the wet part of the year – they retreat underground during the dry season.