The Young and the Restless

Summertime means lots of different things to different people. Here on the Preserve, one thing it means is we get to see the young animals that were born this spring and are now roaming about. Some are still with their parents, and will be through the fall. Our motion-sensor wildlife cameras have picked up several young animals that we'd like to share with you. 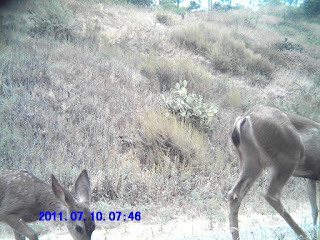 This fawn (on the left) photographed in Sycamore Canyon is probably a few months old in this photo, and is still young enough to still have its spots for camoflauge from predators. Their main predator here on the Preserve is likely the mountain lion, which are sometimes seen in Sycamore Canyon. Deer are very common here probably due to the proximity to the irrigted lawns at adjacent Rose Hills Cemetery, which is probably why the lion is seen here sometimes, but unfortuntely we haven't gotten a mountion lion photo yet. If you see a lion anywhere on the Preserve, contact Shannon Lucas at the Habitat Authority so we can add it to our database (slucas@habitatauthority.org). 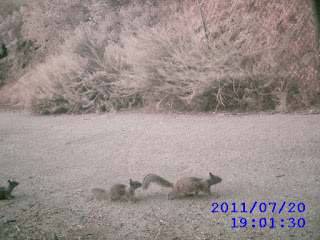 These young ground squirrels (the two on the left) are following their Mom near the entrance to the Colima Tunnel along the Arroyo San Miguel trail, although its unlikely they will go all the way through the tunnel. 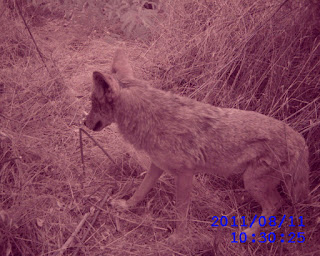 This coyote was photographed just uphill from the Colima Tunnel. It appears to be young coyote due to its relatlvey smaller size and especially its fluffy coat of fur. It is possible that its parents have taught it to travel safely across Colima Road by using the tunnel, as it is heading in that direction, and there is a photo of a coyote's tail heading into the Tunnel (from another camera) only one minute later. This tunnel has been used by several wildlife species, including deer, coyote, and bobcat, to travel safely across Colima Road and avoid being hit by vehicles; unfortunately, bobcats are not seen as frequently here as they once were, but roadkill bobcats and other large mammals are often seen as roadkill at the top of the hill on Colima Road, indicating that there is not a safe way to cross Colima Road at that location. Despite posted speed limits and wildlife crossing signs, roadkill are common, so watch your speed and watch for crossing wildlife!