As some of you may be aware, parts of the Puente Hills Preserve support a rare species of native tree, the Southern California black walnut 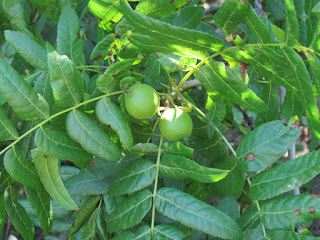 (Juglans californica). These Puente Hills are one of the handful of places in Los Angeles County where this tree is found, and it generally only grows on more moist north-facing slopes or in shady canyons. It is often found growing with another native tree, the coast live oak. In the Preserve, it can be found in the Powder Canyon and Hacienda Hills areas. The presence of walnut woodlands in the Preserve is one of the reasons that the Puente Hills was recently selected for possible inclusion in a new National Recreation Area that could encompass parts of the San Gabriel Mountains and Watershed.

The native black walnut is similar to the cultivated walnut that we buy at the grocery store, in that they both produce walnuts (although the native is smaller). One such cultivated walnut is the English walnut (Juglans regia), which is related to the native black walnut – since they are related, they can and sometimes do hybridize with each other. In the early 20th century, horticulturalists were conducting experiments hybridizing black and English walnuts, including Luther Burbank (in Santa Rosa, Northern California) and the University of California Department of Agriculture. The latter planted one of these hybrid trees in 1907 in the City of Whittier, known as the Paradox Hybrid, where it still stands today at about 14 feet tall and about 100 feet in diameter – an enormous, gorgeous tree (see photo below)! It is actually a Registered State Historic Landmark Number 681 (located on Whittier Boulevard near the intersection with Mar Vista). 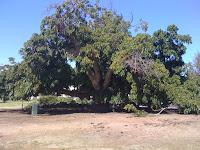 If you hike in Powder Canyon and look closely at the walnut trees you may notice that a few of the trees are much larger, and have much larger leaves, but have very few fruits (often none). 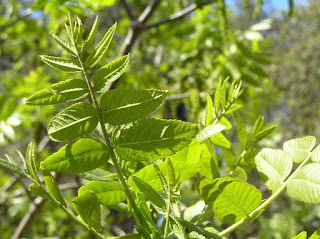 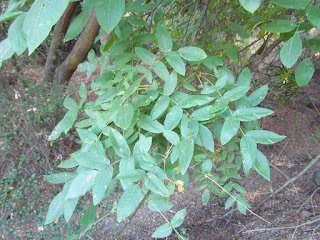 The bark of the native black walnut is very furrowed or “grooved”, whereas the hybrid has either smooth bark (like the English walnut), or bark that is somewhere in between. So how did these hybrids get there? One possibility is that they are the result of black walnuts hybridizing with a nearby English walnut that was planted on someone’s property, perhaps one of the commercial walnut orchards that used to be more prevalent in the past. Another possibility is that these were planted as acorns from a hybrid, possibly even from the Paradox Hybrid in Whittier. This latter seems likely, considering that several resources have noted that the second generation hybrids (meaning those trees grown from seeds of the hybrid) bear very few fruit, which is the case for those hybrids seen in Powder Canyon. 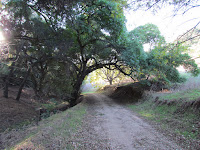 Regardless of their native or hybrid status, the walnuts in the Preserve provide important food and shelter resources for many species of insects, birds and mammals, and are a beautiful and shady addition to our trails.
Posted by About Me at 2:49 PM No comments: