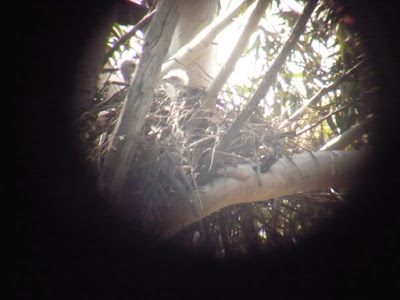 The result of all of that “love in the air” (see blog posting from February 25, 2009) is chicks which have hatched and are growing fast! I was able to catch a glimpse of these approximately 3-week old red-tailed hawk chicks in their nest on April 22. This same nest produced two chicks in 2006, likely from the same pair of hawks that are there now, as they can use the same nest for several years.
When I arrived, the mother was sitting on the nest, but after a while she flew off. A few moments later, two fuzzy white heads popped up! Then, they started pecking at each other, fighting like typical siblings. This photo is of the chicks in mid-fight. The mother was likely going off to hunt or retrieving prey from the father – either way, she will bring the prey (such as rodents, small mammals, even snakes) back to the nest and rip off small pieces to feed to the chicks. They will likely begin to leave the nest in about one month, after which they will continue to improve their flying and hunting skills by learning from their parents. At about 10 weeks old they should be completely independent from their parents. Check back soon, as we may be having a raptor expert come out and “band” the chicks (place small metal bracelets around their legs) so that their dispersal can be tracked over time as part of a regional study on raptor movements. Stay tuned!
Posted by About Me at 11:08 AM