The delights and dangers of Spring 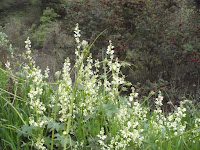 The first day of spring was last week, and the wildflowers are putting on a great show in the hills. Although the most commonly noticed wildflowers are mustard (yellow) and radish (pink, purple and/or white), which are non-native invasive plants that cover large areas, many of our native plants are also in full bloom. Wild cucumber has clusters of small, star-like white flowers along its creeping vines, and morning glory and field bindweed are also vines but with white funnel-shaped flowers. 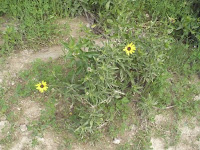 Some of our native coastal sage scrub species in bloom right now are California bush sunflower with its lush display of large, yellow daisy-like flowers, and purple sage with its small purple flowers in pom-pom clusters; the Arroyo Pescadero trailhead off
of Colima Boulevard is a great place to see these flowers. 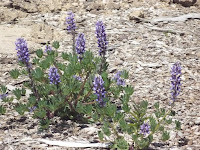 Smaller wildflowers are also in full bloom, especially in areas disturbed by fires (such as upper Turnbull Canyon) or recent Habitat Authority restoration activities (such as along Harbor Boulevard near the wildlife underpass). These include our state flower, the California poppy, purple lupines including the small miniature lupine and the larger Arroyo lupine, and other small purple phacelia wildflowers, including wild Canterbury bells, common phacelia and Parry’s phacelia. 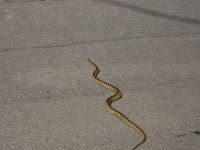 Also, with the weather warming up, rattlesnakes are coming out of their winter hibernation dens. Since they are cold blooded reptiles, they like to be out when it is warm and sunny, and so can be active during all parts of the day in the Springtime. During the summer, they can’t handle the intense heat of midday, so they are most active in the evening, nighttime, and early morning. They can be easy to spot when they are basking in the sun in the middle of a road or trail or on a pile of rocks, but they are also known to seek refuge in crevices and shady spots especially during peak heat. Their coloration allows them to blend in well with surrounding vegetation and dappled shade. Therefore, it’s always best to stay on an established trail, stay alert, and hike with a friend if possible. Never reach down into a hole or crevice or into underbrush where you can’t see, and always step on top of rocks or logs when you have to cross over them (don’t step over them if you can’t see what’s on the other side). Just remember, rattlesnakes only attack when they feel threatened, and don’t attack randomly. And also remember that they, like all of the native plants and wildlife in our hills, serve an important ecosystem function – they help to control resident rodent populations. If you are bitten by a rattlesnake, remain calm, try to keep the bite below the heart, do not overexert yourself, and get to a hospital immediately.
Posted by About Me at 4:43 PM