Should you be afraid of bobcats? 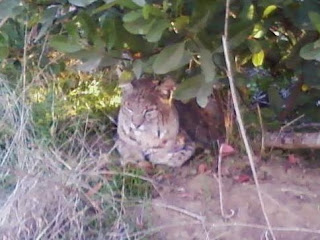 We at the Habitat Authority have gotten several calls over the years from local residents or hikers asking this very question. It is understandable for people to be afraid of things they are not familiar with, and given the relatively reclusive and secretive nature of bobcats, most people never see bobcats.

Some people are afraid of bobcats because they associate them with mountain lions. It is true that they are both wild felines. However, bobcats are much smaller than mountain lions (about 10 times smaller), and are only about the size of a beagle or about twice the size of an average housecat. (They also look quite different, with bobcats having short “bobbed” tails and a striped or spotted body, whereas mountain lions have a very long tail and are a uniform tan color). Given their small size, they also eat smaller prey than mountain lions; bobcats generally eat rabbits or rodents, while mountain lions almost exclusively eat deer.

Although there are rare reports of mountain lion attacks on people (none in the Puente Hills area), there are almost no records of bobcat attacks on people. The few credible reports that do exist generally have to do with a rabid bobcat, which is quite unusual. No reports of rabid wildlife of any kind have been reported to the Habitat Authority. 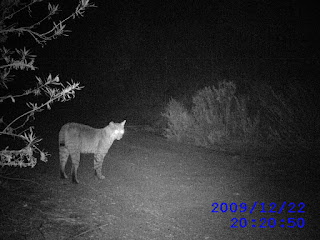 Bobcats, like mountain lions, generally avoid people and areas inhabited by people. They tend to be found less often along trails with higher recreational activity, and they often shift their activity to occur at nighttime in areas frequented by people in an effort to avoid them. Bobcat home ranges occur much more frequently in natural habitat compared to areas within or near developed areas.

If you see a bobcat in your neighborhood, it probably means that you have a lot of natural vegetation in the area. If there are a lot of rabbits or rodents in your neighborhood gardens, that might also attract bobcats. If you want to keep bobcats or other wildlife out of your yard, consider installing fencing around your immediate use area, make sure to clean up fallen fruit or other potential food items (trash, bird seed) that might attract rodents, keep small pets indoors and/or closely supervised, and never intentionally provide food or water to wildlife.

There is no reason to fear bobcats, but bobcats have plenty of reasons to fear us. In most remaining natural areas in southern California, bobcats have to face many challenges in order to survive. One major challenge is crossing numerous busy roads safely. Another challenge is not becoming infected with diseases which could be passed on from other animals or even domestic pets, and not eating rodents that have been poisoned; rat poisons contain anticoagulants and are shown to have a possible association with a disease called mange. Another challenge is finding large enough patches of habitat that are relatively free from human disturbance in order to live and rear their young.

If you do see a bobcat, you should consider yourself very lucky! Seeing a bobcat is a good way to remind us of the wildness that is still present in our area. 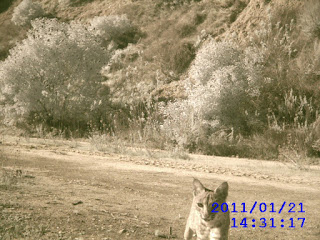 We have seen a bobcat on Arroyo Pescadero trails.

I think we saw 3 mountain lions today. Is that possible?

The mind is a great philosopher. And life is not a philosophy, life is a reality. And philosophy is an escape from reality; philosophy means thinking. Life is, there is no question of thought. You can simply jump into it. You can simply experience it. Visit my site for more information.Thank you.

Back on the subject... Mountain lions are MUCH more reclusive than bobcats so probably you didn't see 3 mountain lions in a day. I've seen 2 (ever) and both times 1) they were in the Cleveland National Forest and 2) they were gone like a shot. Before the fire in Chino Hills, that park was known for its blase' bobcats that seem very indifferent to humans. At the same time, I would not test a bobcat's patience with me. When this write-up says they are two times as big as cats, that means two times as tall, two times as long, and wider - a 30 pound wildcat. In other words, you would not want one upset with you. So if you see one nonchalantly walking along, be thankful for seeing one and give it a lot of well-deserved respect.

There are youtube videos of bobcats taking down deer. Bobcats are impressive killers of prey several times their body weight.