'Tis the season for mistletoe and "holly" 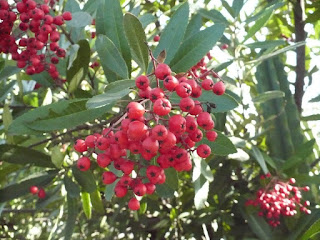 Plants play a big role during the holiday season, from Christmas trees to Poinsettias, holly and mistletoe. Our hills are also celebrating the season with some of these plants.

One of these is not hard to find: Toyon. It is also sometimes called “Christmas berry”, and when you see its bright red cluster of berries this time of year its easy to see why. Settlers to California compared toyon to holly, which is not native to our region, and apparently used it for Christmas decorations instead. A few benefits of using toyon over holly is that its leaves aren’t nearly as prickly, and the berries are not toxic if accidentally ingested. (However, keep in mind that collecting plants from the Preserve is not allowed.) As some of you may have heard, “Hollywood” was actually named after the toyon bushes that grow in the Hollywood hills. Toyon berries serve as an important food source for birds this time of year, and were also eaten by Native Americans.

Another seasonal plant can be a bit harder to find: Mistletoe. Commercially-grown mistletoe is 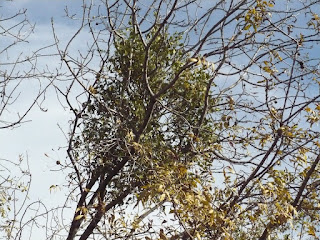 likely the kind that is native to Europe, but the mistletoe generally seen growing here in our sycamores and walnuts is native. Mistletoe is a hemi-parasitic plant, meaning that its roots grow into a tree or shrub which it gets nutrients from, but mistletoe is also green because it has chlorophyll, so it can make its own food as well. The scientific name for the type that grows here, Phoradendron, actually means “tree thief” in Greek. Mistletoe is also evergreen, but you generally don’t see it until the winter when deciduous trees lose their leaves, like in this picture of a local black walnut. Generally mistletoe does not kill the tree that hosts it, but if there are too many mistletoe plants in one tree it could weaken it and make it susceptible to other diseases, fungi or insects, which may eventually kill the tree. So the next time you’re on a hike with that special someone, peek up into the trees and maybe you'll find some mistletoe!
Posted by About Me at 5:35 PM