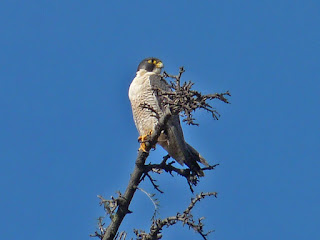 Earlier this week, a Peregrine falcon was seen hanging around the Core Habitat area of the Preserve, just west of Arroyo Pescadero. At first glance these birds look like a smallish hawk, such as an Accipiter (i.e. Cooper’s hawks) or a Buteo (i.e. red-tailed hawks). But the Peregrine falcon has a distinctive black cheek patch and black and white chest barring, as well as the tapered body shape typical of falcons (see photo taken by Robb Hamilton, regional bird expert). Peregrine falcons can be year-round residents in the western U.S., but many migrate farther north to Alaska and northern Canada in the summer, and to South American in the winter. They actually have one of the longest migrations of any North American bird, potentially migrating more than 15,000 miles in one year! Peregrine falcons were placed on the Federal and California Endangered Species Lists in the 1970’s due to population crashes from the pesticide DDT, which weakened egg shells. However, since the ban of DDT, Peregrine falcon populations have recovered so well that they were removed from the Federal list in 1999, and from the California list just this past month in November 2009. However, they are still protected by other state and federal laws, such as the Federal Migratory Bird Treaty Act. They often nest on cliffs, but also now nest on ledges of tall buildings and sky scrapers in urban cities. It is likely the Peregrine observed in the Preserve is a migrant just passing through, but we could only be so lucky if it decided to stick around and set up a nest this spring – we’ll be keeping an eye out for sure.

Another interesting wildlife sighting happened just today – I observed a gray fox in upper Turnbull Canyon, not more than 100 feet below a road with residences. It was alone, and grooming itself before curling up to nap near the edge of a large prickly-pear cactus patch. Gray foxes are native species, as opposed to the red fox which was imported for sport hunting and fur trapping. Gray foxes are often shy and elusive, and so are not seen nearly as often as coyotes. 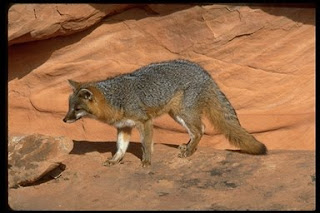 They are also fewer in number than coyotes. However, gray foxes are similar to coyotes in their feeding habits (omnivorous) and activity times (usually from dusk to dawn). They even look similar to coyotes at first glance, but are smaller, have proportionally larger ears, and have a reddish color under their chin and body (but are mostly gray and brown on top and on their tail). Unfortunately, it was too far away for me to take a good photo, but here is one from Calphotos (calphotos.berkeley.edu) for reference (photo credit: Gerald and Buff Corsi © California Academy of Sciences).