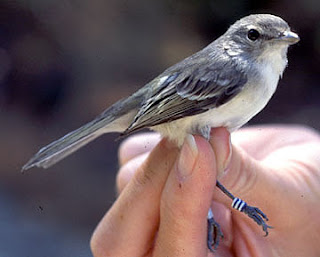 While many people have heard of our resident threatened species, the coastal California gnatcatcher, we have an endangered species that is a seasonal visitor as well – the least bell’s vireo. The least bell's vireo is migratory, so it spends the winter in Baja Mexico, but comes up north into coastal southern California to breed in the spring and summer. It has been reported as breeding in the past at the nearby Whittier Narrows.

Larry Schmahl of the Whittier Audubon Chapter reported hearing one singing in Sycamore Canyon near the trailhead on April 9, 2009; I went out and also heard and saw an individual (possibly two!) on April 16th, and I heard and saw one again just this morning. The habitat in this location is perfect for the least bell’s vireo, as they prefer dense willow riparian habitat, including associated plants such as mulefat; however, they need some structural complexity in the habitat (i.e. multiple layers), so they often nest in 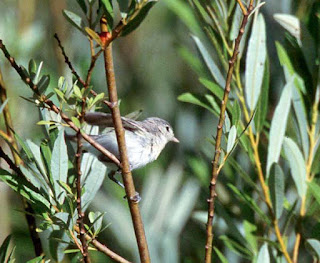 early successional (newer) habitats including recently restored areas. Since the riparian habitat at the Sycamore Canyon trailhead was restored within the past few years, the vireo may stick around and nest this year. Although a single least bell’s vireo was observed at this location in 2005, it did not stay to breed; however, the site may now have developed the level of habitat structure that it needs to breed – we’ll be keeping an eye, or rather an ear, out throughout the rest of the spring and summer. If the vireo continues to be seen or heard through June or July it is likely nesting in the area, and will remain until it migrates back down to Baja in August or September.

Although the least bell’s vireo has experienced population increases recently, it is still subject to threats such as habitat loss from the removal of riparian vegetation, as well as from nest parasitism from brown-headed cowbirds. These cowbirds are known to lay their own eggs in the nests of other species, including the least bell’s vireo, which result in much larger and earlier-hatching chicks that compete with the vireo chicks for food – cowbird chicks can even toss vireo eggs out of the nest before they hatch! We’ll be keeping an eye out for them as well.
Photo credits: Upper - U.S.G.S ; Lower - USFWS, Photo by Po-Hon Liu.
Posted by About Me at 1:06 PM